It was a beautiful, warm, sunny spring morning in Chicago. Monday never felt so good.

There was so much change in the air for us. My job was going away in September, but a handful of us were on retainer contracts until then to babysit the technology while the business moved to New York. It was easy work, stress-free and casual. We were pretty confident we were the only branch of Goldman Sachs anywhere in the world that was wearing shorts and sandals, except maybe whatever shady money laundering thing they had happening in the Caymans.

Change was on the way at home, too, with our first child due in about a month. The previous night was the family’s baby shower for us, so we got home a little late and were up sorting through the gifts. I started putting the crib together, finishing up the baby’s room, stuff like that, while Sharon tried to doze on the couch.

I got up late that Monday with no special reason to get in early and rode my bike to work. It was about a nine-mile ride, a good workout, and even the dodging of trucks and the thick diesel fumes as I wended my way down Elston failed to dampen my spirits that day.

The ride took about 45 minutes. I took a shower at the company’s gym in the then-Sears Tower and headed downstairs to SBUX for coffee and something to eat. I found someone’s abandoned copy of Financial Times and decided to sit outside that bright morning for a few more minutes before heading up into the office, nary a care in the world.

So, about 90 minutes after leaving the house, I sauntered into the office, feeling fit and refreshed and ready to start the day, and I was greeted at the elevator doors by Sandie, my intrepid administrator, who screamed, “WHERE THE HELL HAVE YOU BEEN YOUR WIFE IS HAVING A BABY YOU JERK WHY AREN’T YOU ANSWERING YOUR PHONE!”

As the blood drained from my head, my peripheral vision collapsing all the light into two small cones before me, I opened my backpack and pulled out my cell phone, which had been off all morning. “HER WATER BROKE SHE IS DRIVING HERSELF TO THE HOSPITAL IF SHE DELIVERS THAT BABY ON THE KENNEDY AND IT’S ON THE NEWS YOU’RE DEAD!”

Knees buckling, the pink pages of the newspaper now desperately scattered around the elevator lobby, Sandie’s voice slowly fading into white noise, I turned back toward the doors and I dialed my voicemail. “You have…twelve…new messages.” I hung up and called Sharon, who was just pulling into the valet parking at Northwestern. She was irritated at my mini-vacation but sounded calm. “I’m fine, my water broke, but no contractions yet, just get over here.”

In the taxi I listened to the messages. The first one was her, calm, “Hey, I think my water broke! Call me back!” A few minutes later: “Hey, yeah, it definitely did, I called the doctor and they told me to come in. Can you get back here to drive? Where are you? Call me.”

These progressed in urgency and tone. About the fifth call in, others joined the party. My sister: “Where are you? Pick up the phone! Call your wife!”  My father-in-law: “We’ll meet you at the hospital, assuming you’re not already there from a traffic accident.” Sandie: “Jesus, John, answer your phone, IT’S BABY TIME YOU’D BETTER BE DEAD UNDER A BUS OR SOMETHING!” More from Sharon. I think my mom chimed in, too.

Yes, I know, I’m the worst person in the world for not having my phone on with my wife in the late stages of pregnancy, but in my defense, she wasn’t due for another month.

Anyway, the rush was ultimately needless. It was a full twelve hours later when Danny joined us, sometime around 10:30 that night, just after the Sox had beaten the Orioles 5-4. Happy endings all around, once everyone had calmed down. 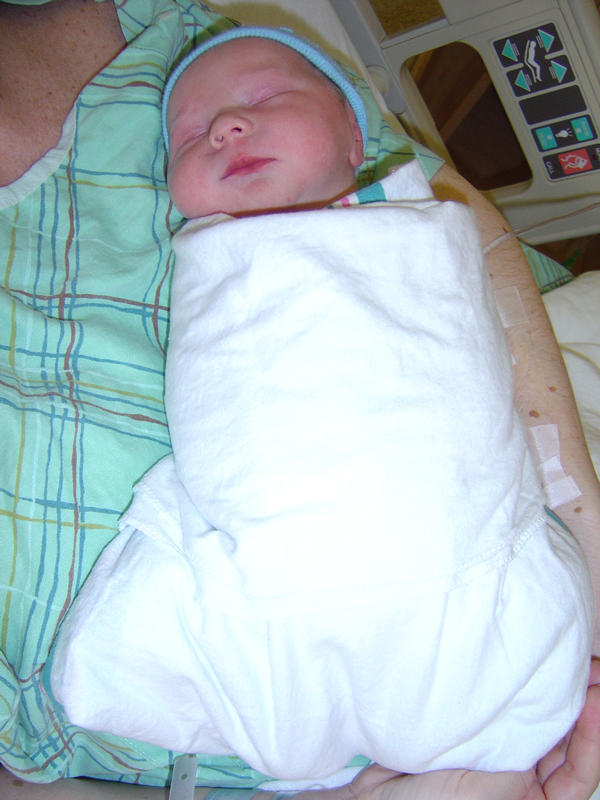