I thought the right thing to do was to let him pull the new vanity up the stairs by yanking on the dolly, while I stayed below to push and steady from beneath. If something went wrong, I didn’t want him ten steps up and stuck between the 100-pound box and the planet. He’s inexperienced in the ways of Moving Shit Around, not yet having made his way through that semester of Man School. So it wasn’t his fault when his shoulder dislodged the framed picture on the stairway wall as he gained the last step to the landing. It was my error for not seeing that risk ahead and clearing it, a “failure to supervise” as we used to say in the biz.

Do you know how much glass there is in a 10 3/8” x 19 5/16” pane? I mean, you can do the math and tell me the area, but do you know how much entropy is stored up in that crystal structure, just waiting to be released as it bounces on every one of the thirteen stairs on the way down? I watched it all happen as I steadied the load, in that semi-slow motion which the brain often engages as disasters unfold. The early impacts broke it into a few large pieces, but each subsequent encounter with the wooden steps on the way down increased the shard count exponentially. Thirteen steps, probably not quite 213 pieces, but I wouldn’t bet too much on the under, either. They ranged in size from grain of sand to iPhone. I spent the next hour on my hands and knees, a headlamp affixed to better find the tiniest sparkles embedded in the rug, using the bare tube on the vacuum to cover each square inch. The bigger pieces ended up in an old Lego box, newly available to be repurposed. How timely. 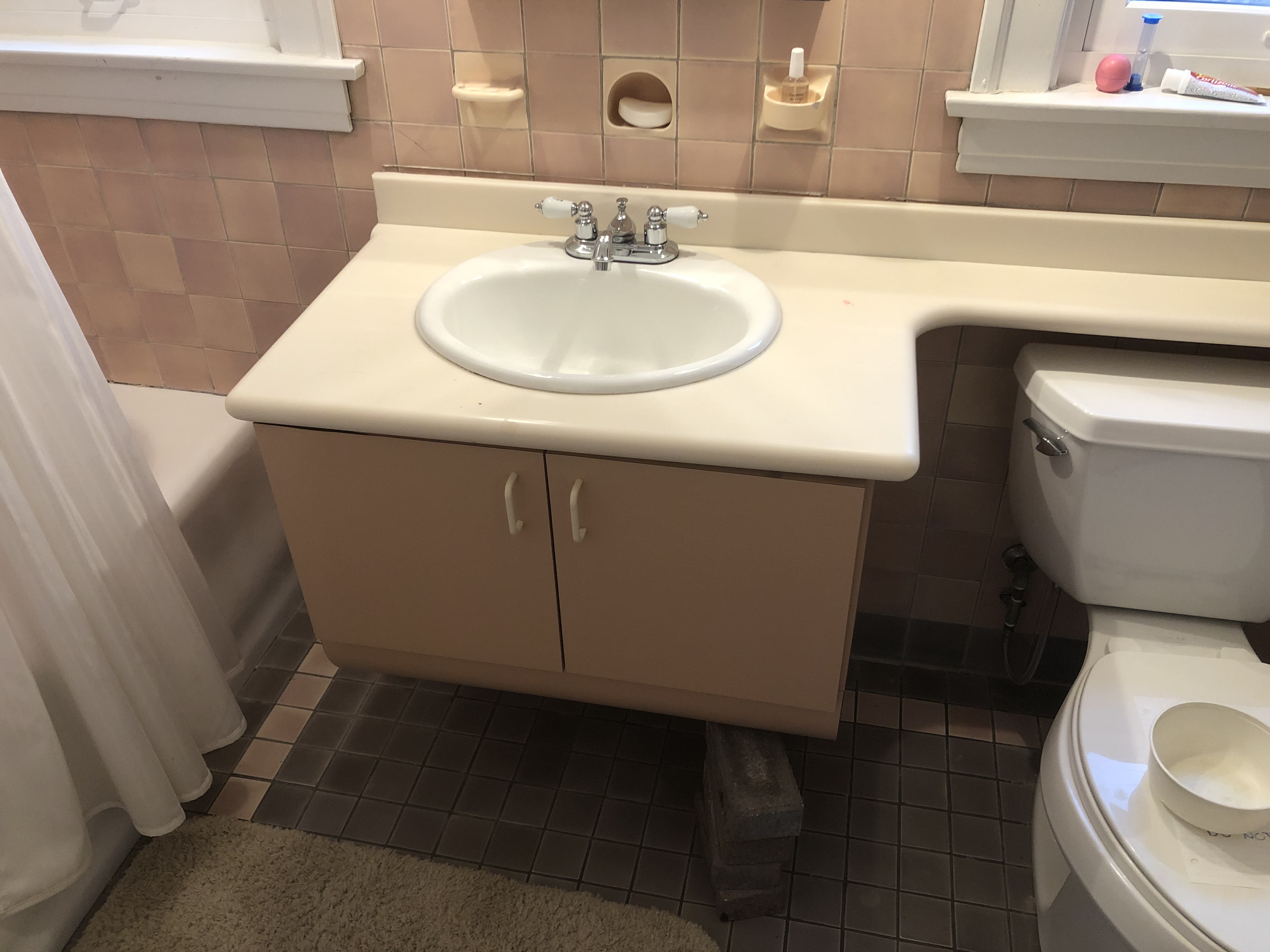 I started preparing about ten days ago. You see, I did my masters thesis on problems that become exponentially harder as the input size grows linearly. It was very literally about finding worst-case scenarios when things are growing unbounded. So I don’t need to be scolded by governors or village board presidents. I get geometric progressions way better than they do. I lost sleep about this stuff when they were busy jockeying for position in their homecoming courts.

That flavor of education, and then my career in building real-time trading systems that moved giant piles of Other People’s Money, combined to instill a certain mindset that has bled over into how I manage my personal life. This is the algorithm:

It’s why I updated the will, desperately looking for a notary on a Friday night when everything was starting to shut down. It’s why I made sure the shared password vault was working. And on the third iteration through the loop, it’s why I’m preparing the guest room and bathroom in the likelihood that we need to isolate someone in this house.1 It’s an awful time for a home repair project, but like that old saying: the best time to plant a tree was thirty years ago; the second best time is today. The difference here is that you could always plant the tree tomorrow, too. In this case, that might not be an option. The tree store might be closed.

And if I’m the one to wake up with chills this weekend, who’s going to get that bathroom working? Things are progressing geometrically. Tomorrow isn’t anything like today for a long sequence of days to come. What needs doing needs doing now.

Was it the right choice to embark? The old vanity worked, technically, though it had come loose from the wall and those bricks were the only thing holding it up. One false move and it would have broken free, possibly taking one or both supply pipes with it. Water water everywhere, water near and far. It’s also insanely heavy, and a broken foot is the last thing you need for your fever. If somebody needs that bathroom, someone who shouldn’t be in contact with the rest of us, that would be the worst possible time to have to deal with a plumbing emergency. There was risk in doing it, though, because once you start a project like this, you have nothing until you’re done. There’s no partial solution once you bust the old one out of there. Completion is the only option. How long will it be down? What’s that risk, and how does that compare to the current state?

The running joke here is that the time I spend on any home project I undertake is 50% doing the work, and 50% in the three trips to Home Depot to get the parts or tools I thought I had or didn’t know I needed. Another amusing fractal appears here, in that the first trip is all the big stuff, the second trip is for a couple of tools or some small bit of hardware I forgot, and the third one is like a single bolt.

There’s nothing amusing about three trips to Home Depot in the current climate. They’re doing it right, limiting themselves to 50 customers in the store on a strict one-out-one-in basis, and they’ve placed big red X’s on the sidewalk at six-foot intervals so we know where to wait. Once inside, my approach is clinical. I go straight to what I need, touch nothing except those items, avoid everyone, check out, and do the hand sanitizer dance in the car. I scrub down again when I get home. I lysol the steering wheel. I work maniacally to mitigate risk.

Yet risk calculus remains, mostly to be worked out while staring at the ceiling. Are these trips a bigger risk than not having an isolated, functional bathroom? Will I be able to buy hardware anywhere next week? Will I be able to lift a wrench next week? Could others benefit? Are others harmed? 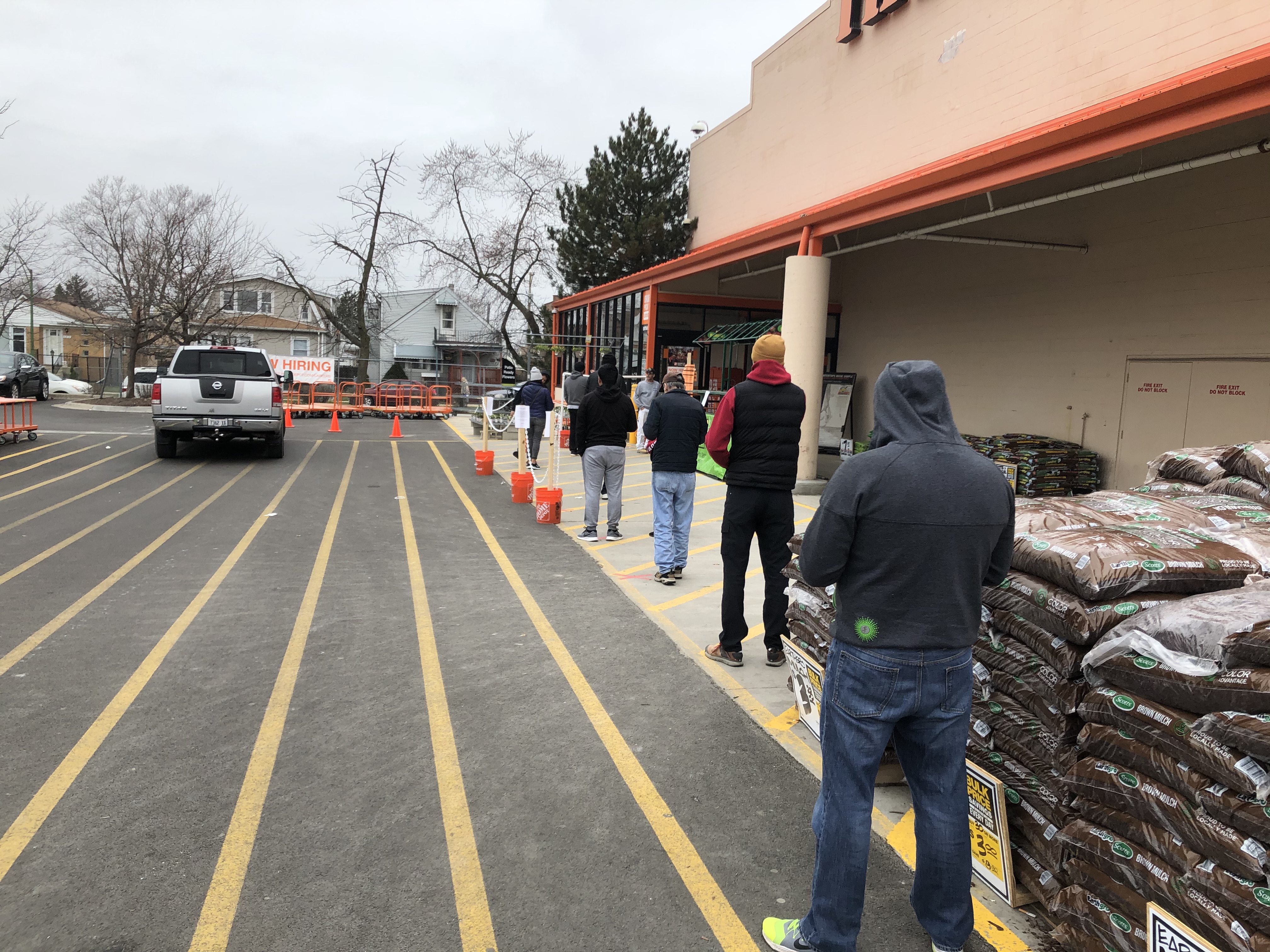 The old vanity’s out, the new one’s mounted to the wall. But I busted the drain on the old one, so I can’t reuse it as I’d hoped. I also have an awkwardly-sized supply line for the hot side, way too long. I’d make do, but since I have to go in for the drain assembly, I’ll get the right line, too. I’ll be in the plumbing aisle anyway. It’ll be my third and final trip. More clinical and precise than today’s, I promise you. I’m not going back a fourth time.

Once I have the parts, there are only a few minutes of work left. My apprentice and I still need to get the old one down the stairs and out to be junked. This time, I’ll take the surviving picture frames off the stairway wall first. Risk mitigation. 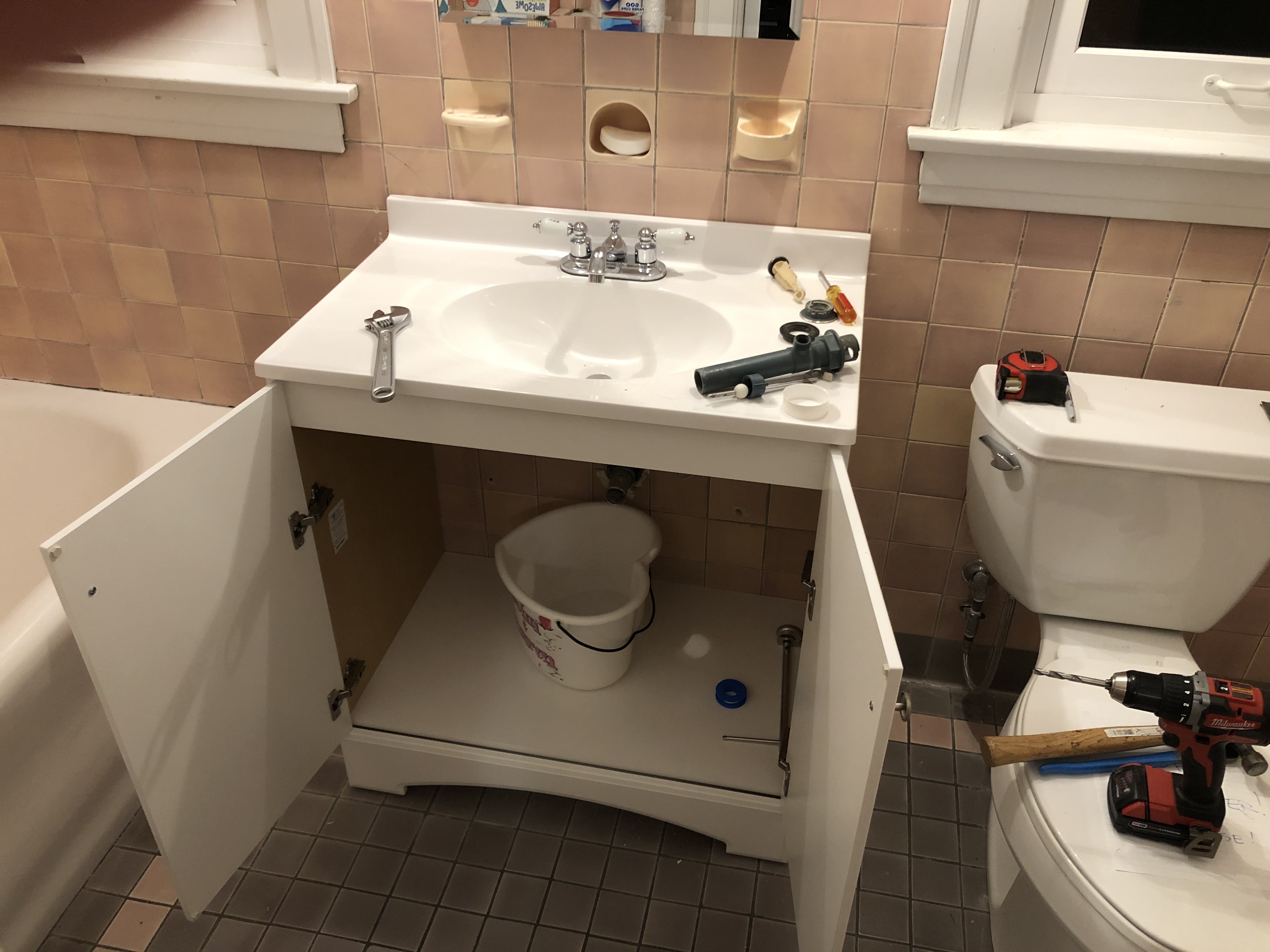