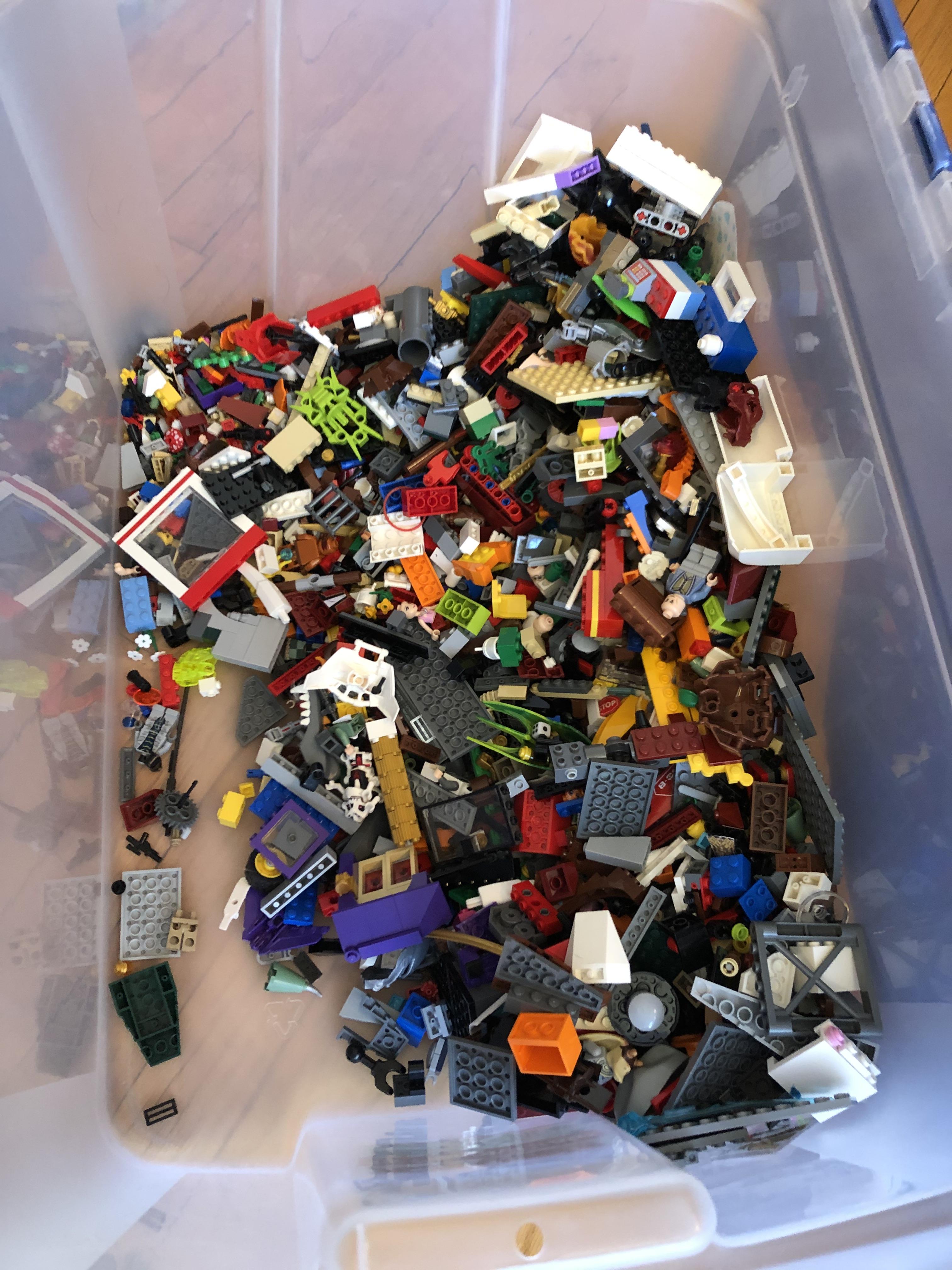 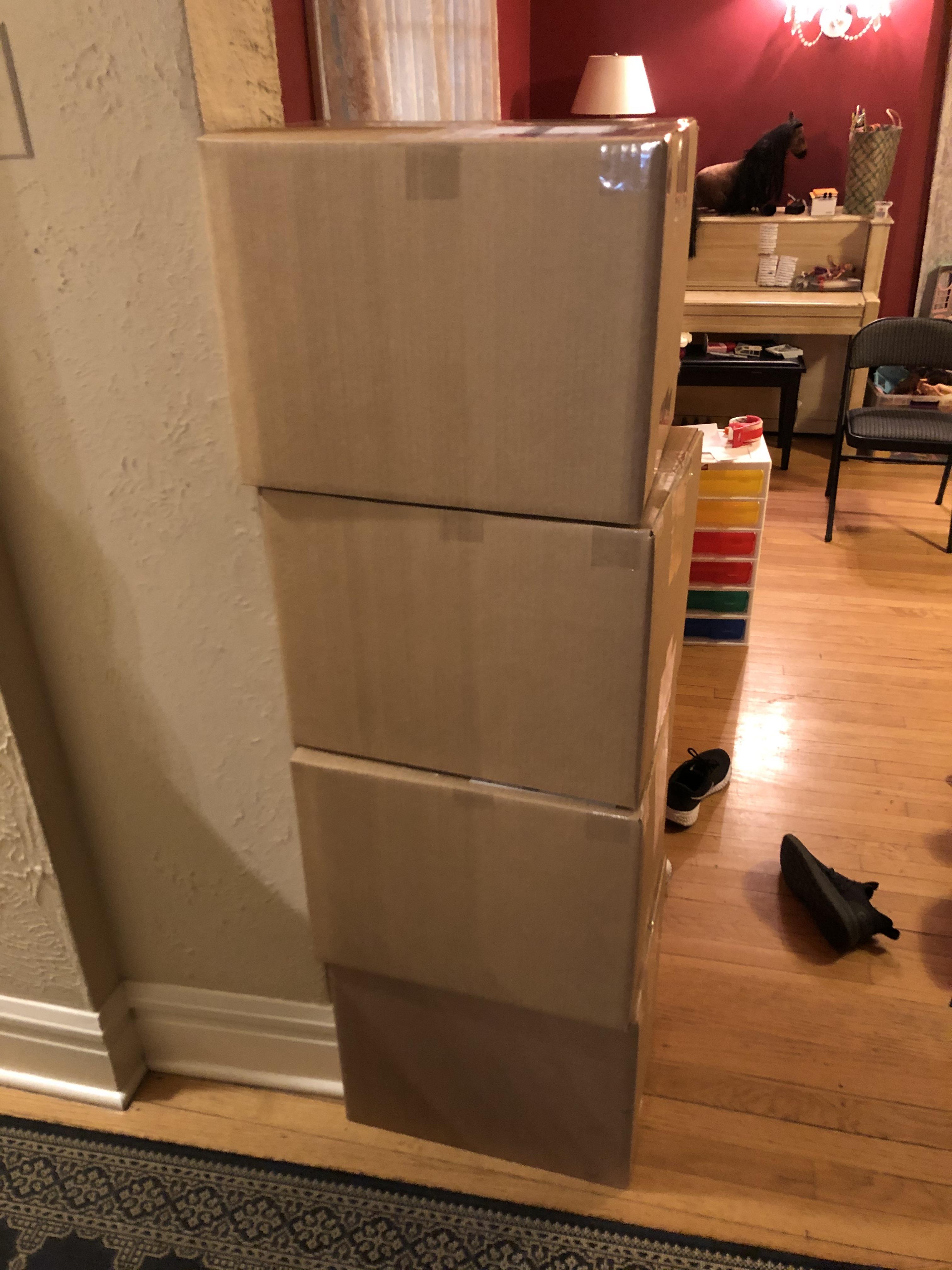 On the face of it, it was cathartic to spend several hours yesterday dismantling ~10 years of Lego creations to box up for donation. Entropy had already taken its ruinous toll on the largest structures, leaving a lot of mid-sized substructures that still needed final disassembly to fit them into the fewest boxes for shipping.

That's what I told myself, anyway. I could have easily tossed the partially disassembled stromtrooper carriers, wings of Hogwarts, and segments of the Temple of Doom along with the other substructures both generic and branded into cardboard shipping boxes. With Lego Replay, where they will accept donations of your used parts, and (allegedly) clean and repurpose them, the shipping is free, so what's another box or two?

(Aside: if you happen to know that Lego Replay is a massive fraud that doesn't actually make these toys available to less fortunate kids, but instead has some special dispensation from the administration to scatter these parts around the ocean floor, or across the most ecologically sensitive parts of our national parks, please don't tell me. Also, if in fact my time would have been better spent meticulously reboxing these as their original kits and selling them for thousands on Ebay, don't tell me that, either.)

My secondary mission as I went handful-by-handful through the giant bins of parts we'd stored haphazardly over the decade was to do Lego Replay a small favor by making at least some effort at combing out the non-Lego product that ended up in there. There was plenty: Strawberry Shortcake figurines, dice, coins, an unused Nordstrom gift card, a dreidel, chunks of now diamond-hard modeling clay. And tufts of dog hair…some was recent black, but a surprising amount was vintage brown, which brought a whole ‘nother round of Major Feels about eras gone by.

Really, though, my reason for doing it manually like this was to dig in and own it—by feeling it literally, to embrace the feeling of it emotionally. Every one of those sharp, tiny corners. All sorts of markers are in the air recently about the passing of time and the transition of eras. I'll have more on that soon; some of it's too big for me to get into words just yet. And while this one may seem trivial, busting up Legos to give away, it's not so slight if you understand what a substantial portion of the kids’ early years, especially Danny's, was spent with these amazing toys. (They did both bless the donation, by the way, even if neither volunteered to help.) I needed to be elbow deep in it before I could say goodbye to it. I needed to spend time with the body.

Fittingly, I think, the last parts in each bin tended to be the tiniest ones which naturally settled to the bottom. Both the decorative caps, and the little structural pins and escutcheons without which some of the more complicated structures wouldn't hold together at all. I remember crawling around on the floor desperately searching for these bits on several occasions, looking for a piece of plastic the size of a corn kernel (and always the exact color of the floor) whose absence had reduced a child to tears, and a $100 toy to a pound of plastic. I don't think we ever failed to find them. Everything was built to spec, heartily played with, modified fancifully, and eventually retired. Exactly as it should be.

I don't know what happens next, but I do know there's lots of raw material here for building new things.